Today is my day off and I went with E to the exhibition. 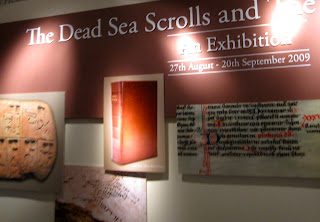 I had two opposing experiences in service attitude here. One left a bad taste in my mouth while the other left something sweet for E.
The first took place in the very first exhibition room: There was another baby in the group whom E was interacting with. The two mothers retreated to the far end of the room when the curator started his talk, which he explained will take 12 minutes. E was giggling and trying to play with the baby so I carried her and reminded her to keep her volume down. She is able to control that, except for her bursts of laughter when she got amused with the baby. In the meantime, the two mothers were straining to hear the curator from afar while handling our wriggling babies.
Out of the blue, the curator shouted across the room and asked that E be taken out of the room. I'm not entirely oblivious to the occasional noise that E made, but I am sure she wasn't disruptive. She was just giggling and saying things like "peek a boo" and "where's baby". Moreover, I didn't think the group minded. You know how some people might glare at a whining or screaming baby. I certainly didn't get any of those killer stares from them, only from the curator.
The two mothers took the two babies out of the room and waited for the curator to finish, before we could proceed through the room to the next exhibit. I wish I had joined the Chinese-speaking group. When I caught up with this group, the lady was enthusiastically explaining to her group of 3. Her passion for the displays as well as earnestness to get her message across to the group showed. Here is someone who is more concerned with being understood, instead of merely being heard.
The second incident happened at lunch. We went into the cafe half an hour before lunch hour started. I settled at a table so that E could snack on her food. A short while later, the waitress showed up with orange juice for E. I was surprised and touched. 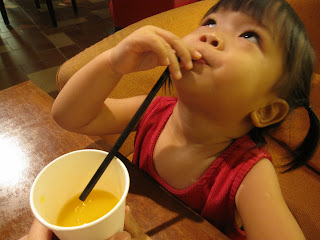 On balance, I encountered many child-friendly people here. Most will tease E and try to get her to say hello. At the very least, they would smile and watch if she would return that. Sure, I cannot demand that people around me accept and accommodate children, noise and all. But surely putting up with two babies for 12 minutes isn't asking for too much. The curator gave me the impression that he simply couldn't bear to be in the same room with a giggling girl and a crawling baby for more than five minutes.
At the other extreme was the thoughtfulness and patience of the waitress. While it is typical that water is served to customers, she exceeded my expectation by offering a large cup of juice, with a straw, to E. When the cafe filled up with more customers and the food was slow in coming, she still went about her duties with her sweet smile, calming impatient customers and showing up with extra serviettes before being asked.
I hope your day has been brightened by someone.

Totally know what you mean! Had a really rude woman that day who tried to rush to the front of the queue although it was obvious we had a young child. Just coz she didn't want to wait a little while for a table. But have had people who just held doors for us and let us "cut" the queue because they understood that it isn't easy with a young child.